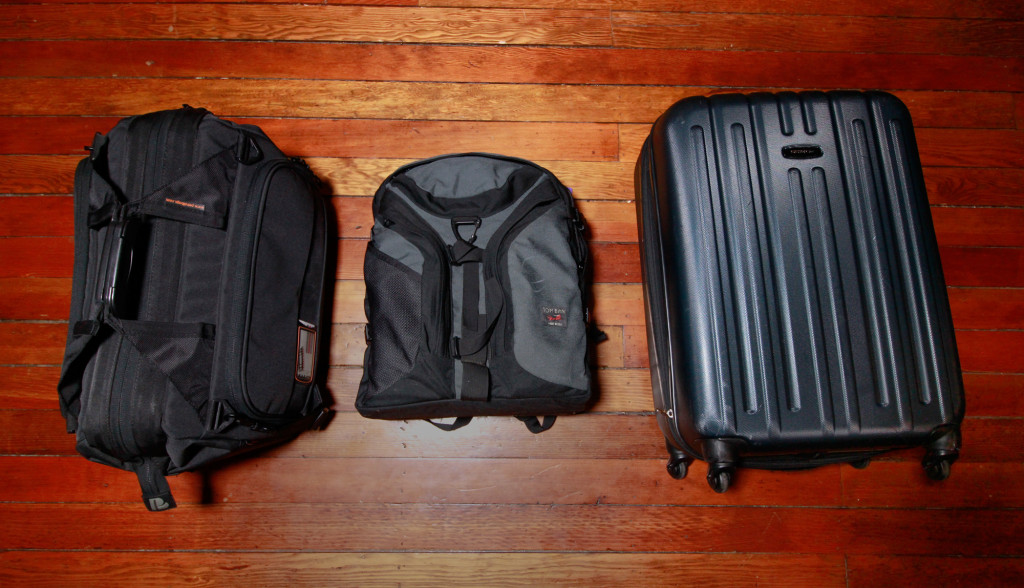 Are you looking to travel with your filmmaking gear but don’t want to spend your entire budget on checked baggage every time you fly? Or maybe you’re trying to put together a documentary video production kit that is flexible enough for all kinds of shooting scenarios, while maintaining the highest of broadcast and aesthetic standards?

Two years ago I wrote a post about a complete documentary filmmaking kit that fits in just one backpack. Amazingly, over 20,000 filmmakers have used that kit as a guide for putting together their own traveling video production kit. And although that post is still very useful today, I think it’s time for an update.

Also since that post two years ago, my productions for PBS and corporate films with Video Dads have become much more sophisticated, my Video Dads partner and I have experimented with loads more gear, we have produced over a hundred new documentary videos around the country, and through it all, we’ve honed in on a kit that is much more comprehensive than a bare bones backpacking kit. In fact we both carry the exact same kit.

In the past two years I’ve personally traveled nearly 100,000 air miles with this kit. I’ve brought every piece of gear I need for a complex production in any corner of the country. And I’ve never checked more than one bag.

Please trust me when I say this, the gear and approach in this post is not just a random collection of equipment – I’ve had the unique experience of trying tons of gear on all kinds of shoots, and this is the system that I believe is the best documentary filmmaking kit for traveling producers today. 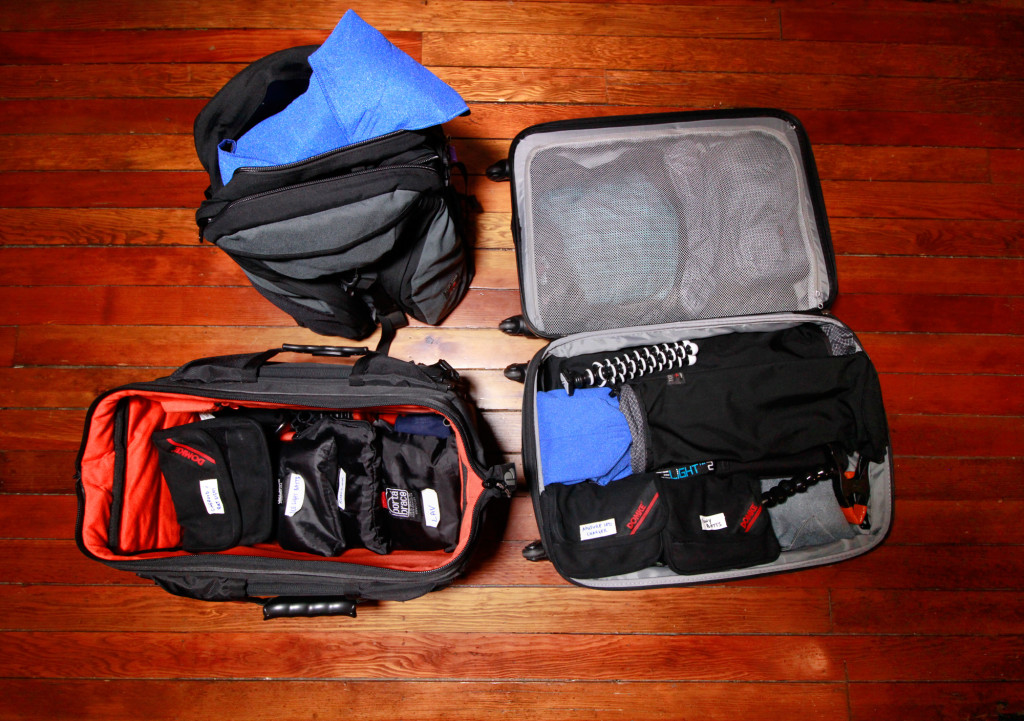 Essentially, this packing approach boils down to a few simple guidelines:

1. Pack the most expensive items like your camera, lenses, and laptop into a backpack that stays on your back at all times. On the plane, it can go under the seat in front of you.

2. Pack less fragile accessories in your official carry-on, but pack your gear in a way that you can safely gate check it on smaller flights that have tiny overhead space.

3. Pack the least fragile and heaviest items in your checked suitcase, along with clothes.

4. Instead of buying photography or video bags with built-in dividers, use neoprene wraps and small pouches to protect and organize your equipment.

5. When possible, choose the lightest equipment you can, but don’t leave anything behind you might need. It’s better to have slightly more gear than necessary, than be stuck without something because you wanted to pack really light. You’ll regret leaving something that could help tell the story, more often than you’ll curse carrying heavy bags through the airport. 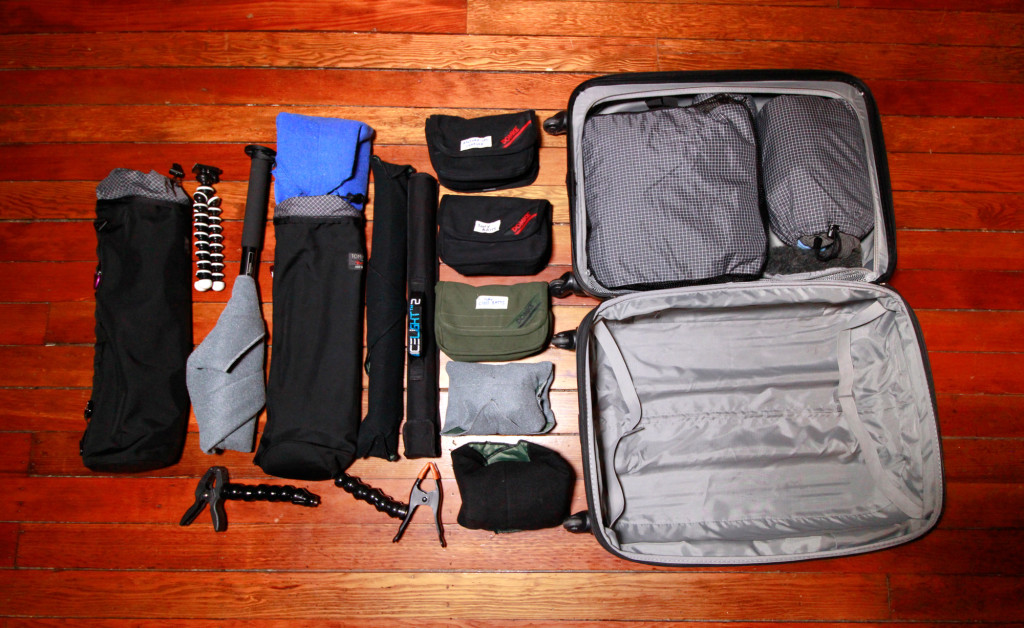 In my suitcase I use Tom Bihn packing cubes for clothes in one half of the bag, and in the other half I pack my tripod and fluid head, my monopod and fluid head, two light stands, a boom microphone kit, a Westcott Ice Light 2, batteries for my C100, Sony batteries for other lights, a small slider, and a few clamps and other knick knacks. On flights that have tight battery restrictions, you can take these out of the checked bag and bring them along in your carry-on.

I have about 20 Domke 19″ neoprene wraps I use to protect just about all my gear. For other accessories I use Domke pouches in various colors, as well as Porta Brace pouches. This system is way more flexible than buying into photo or video bags with pre-built dividers, and you can use luggage and bags that don’t scream “expensive equipment inside!” I wrap the tripod and light stands in the Tom Bihn 520mm Quivers, which attach to the side of the backpack upon landing.

My hardshell suitcase is a standard medium size spinner, but I recommend going for a larger 28″ or 30″ suitcase, so you can fit a more standard length tripod and monopod (more on that below). That’ll be my next purchase. I got my Samsonite hard suitcase from Kohl’s for about $100 – it doesn’t have to be fancy or offer intense protection (that’s what the Domke neoprene wraps are for), but it should be lightweight. Mine is about 8 lbs empty, and full it’s usually right at the 50 lb cutoff. On the other hand, the very durable Pelican hard cases that video professionals use worldwide can start at over 30 lbs empty, which means you’ll have to pack a handful of them and that add up quickly in luggage fees. 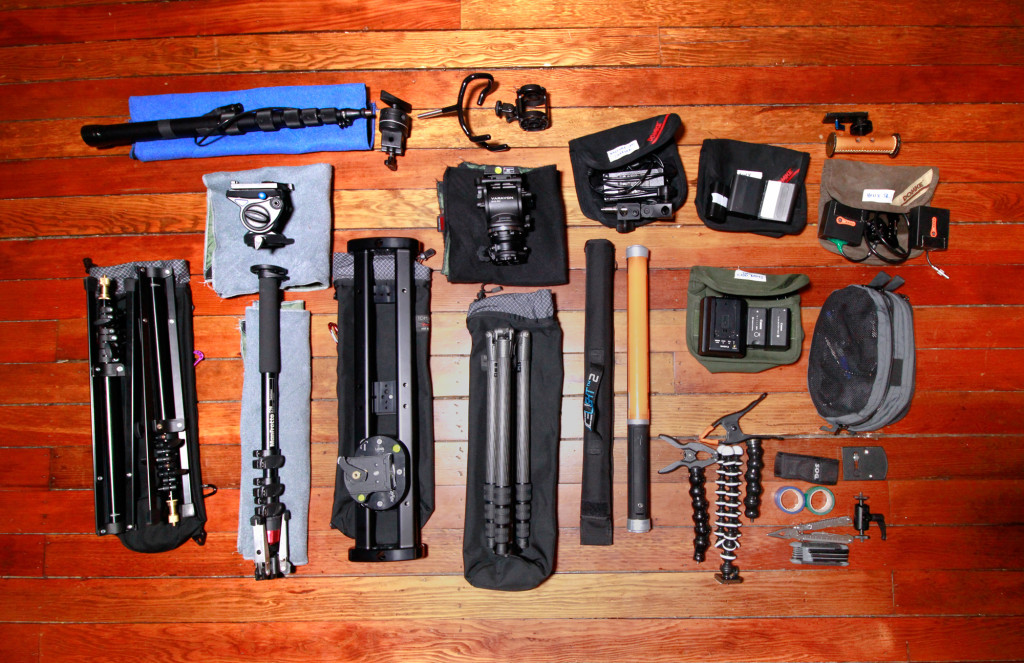 Here’s everything that’s in the suitcase, in addition to clothes:

There’s also Sony NP-style batteries for lights and the Ninja Blade external recorder, Letus Helix batteries and accessories, Aputure Amaran LED AC adapter and light stand mount, a Tom Bihn snake charmer with various stuff like a SOG knife, allen wrenches, extra Manfrotto 494 quick release plates, tape and audio connectors. And because I only bring one light stand for my key light (the Ice Light) and one light stand for the boom microphone setup, the other lights go on accessory clamps like the Dinkum ActionPod Pro, and Gorillapod. 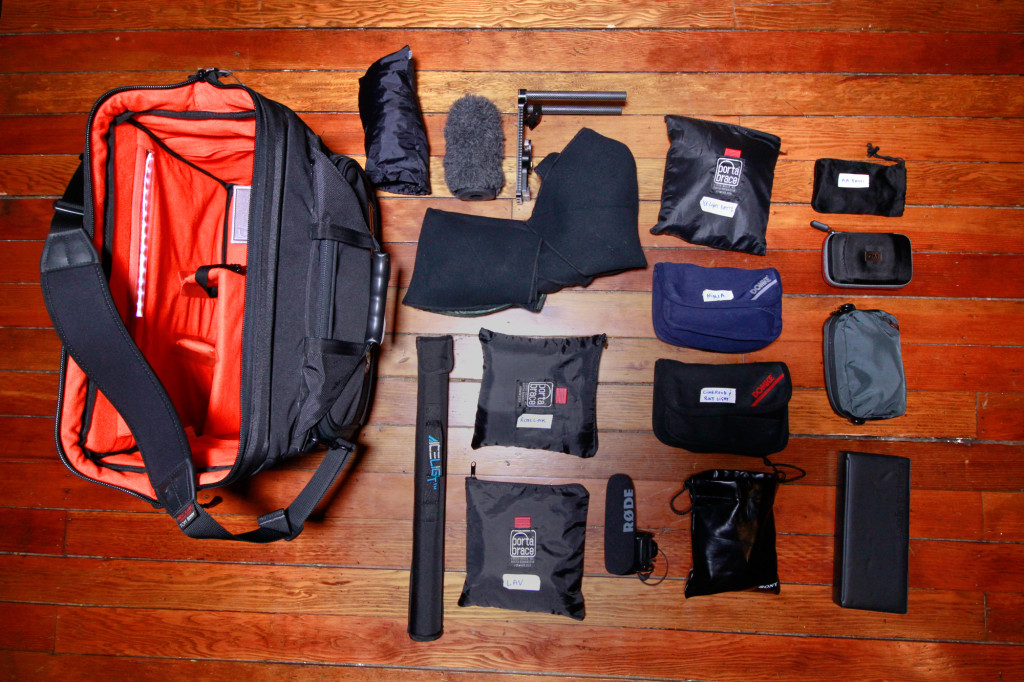 For my carry-on bag, I love the Sachtler Dr. Bag-3 (mine is the older Petrol version, which is identical to Sachtler before they merged brands). It’s particularly great because when it’s unzipped the hard sides make it an extra tall bag, which means on location I can fill it with gear to the brim, and leave it unzipped while I carry it around. The only downside is the little feet on the bottom sometimes get caught when I’m placing it in the overhead compartment, an annoyance that makes my partner Travis prefer the trusty Porta Brace DV4 bag instead. Both are superb.

In this carry-on bag I keep everything that is expensive and kind of fragile and want to keep by my side, except the camera, lenses, and laptop that goes in my backpack. The beauty of this setup is for smaller flights where the carry-on space is limited, you can gate check this bag and be comfortable that all your stuff is still padded and safe.

By the way, I highly recommend replacing the strap in all your bags with a Tom Bihn Absolute Shoulder Strap – it’s amazing and comfortable even when carrying 40 pounds of gear. 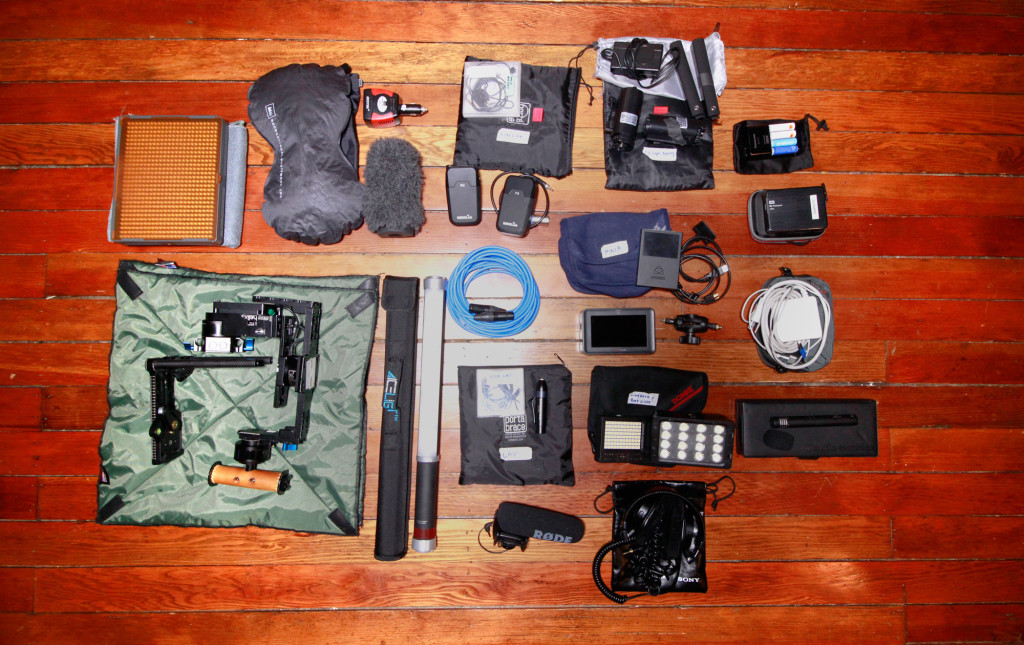 Here’s everything in this bag: 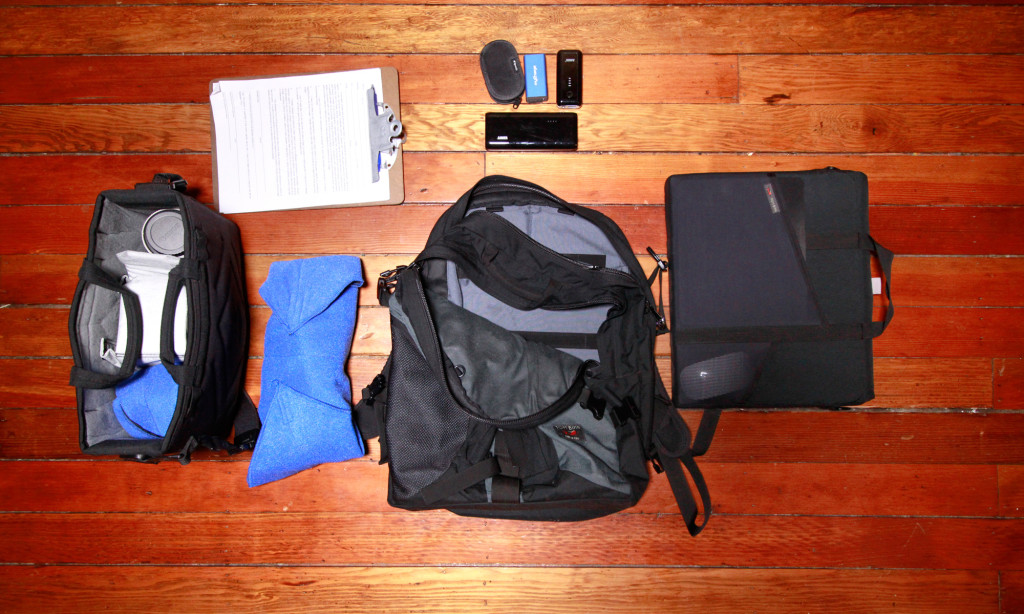 Countless full time travelers swear by the Tom Bihn Brain Bag, but I believe it’s also the best kept secret for photography and video production people too. The Canon C100 can get quite bulky when it’s assembled, which makes it hard to fit into many bags. But the Brain Bag has a front and back compartment, and the assembled C100 fits perfectly in the front section, while all the lenses go in the back section, housed in the Tom Bihn Camera I-O. The I-O is its own little lens/camera carrier that you can take out and wear when you want to just carry around your camera, lenses, and nothing else.

When I’m using it for air travel, the Brain Bag is my “personal item” that never leaves my back, and I store it under my seat while my carry-on goes in the overheard compartment or is gate checked. Camera body and lenses go in the back part, and my Macbook Pro goes in a Tom Bihn Brain Cell laptop protector, which fits into the front part of the bag. I have the Horizontal Brain Cell, but I recommend the Vertical one instead, so you can easily reach in and remove your laptop when going through TSA scanners. 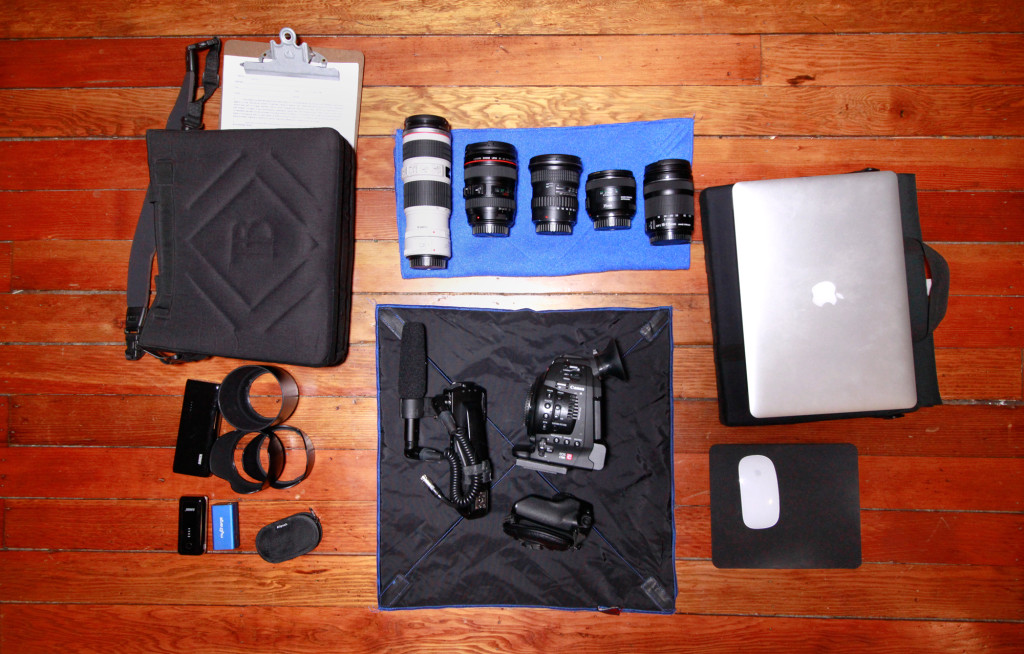 In this backpack go the essentials: 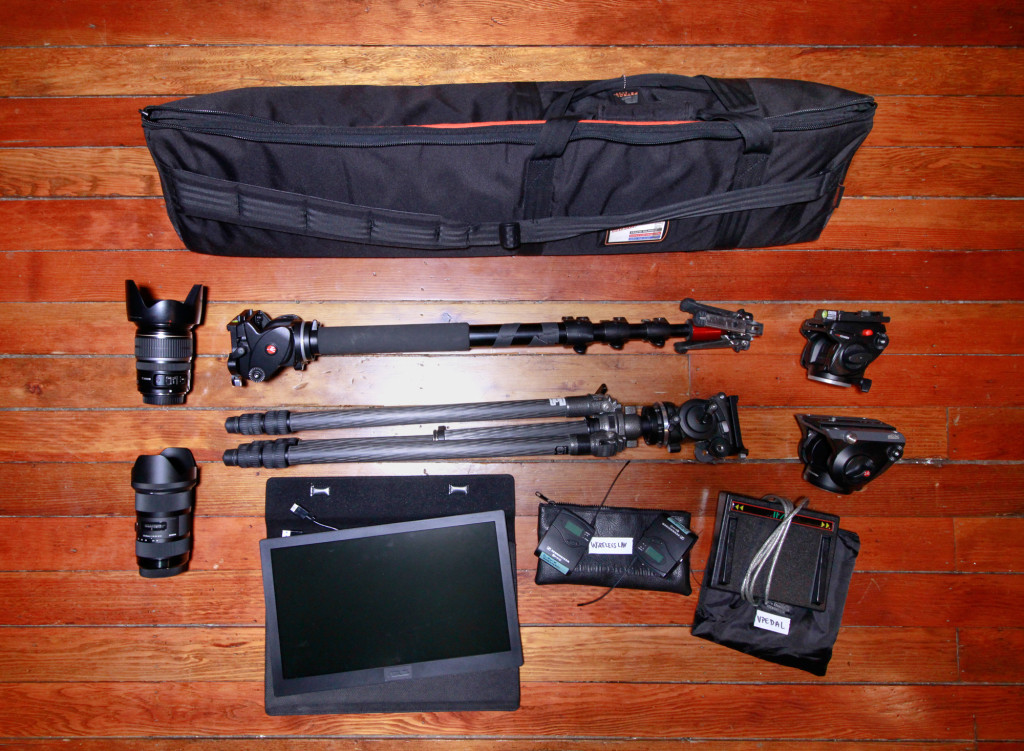 As I mentioned, my partner in crime Travis brings the same exact kit as I do on all of our trips. But because he has a larger suitcase, he gets to fit a larger, more heavy duty tripod and a more sturdy monopod. He also brings some alternative gear than I have in my kit, partially because we train a lot of PBS staff around the country in video production, so we want to show them different kinds of gear we use.

Here’s what’s in the above photo:

Although I still believe the C100 is the best large format video camera for traveling documentary filmmakers, there are other cameras out there that I think fit the same type of shooter, but with slightly different needs. The good news is they all work with the above travel system. 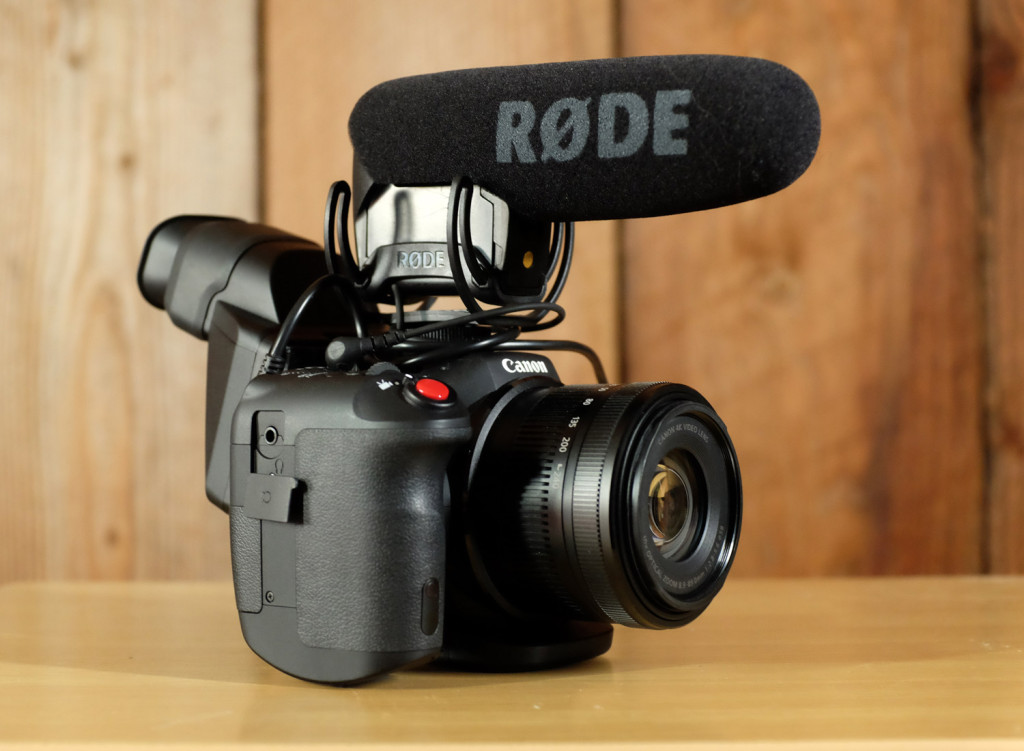 The Canon XC10 is a great little camera that can shoot 4K (if needed), it matches the other Canon colors well with its C-log picture profile, but most of all, it has a huge zoom range while maintaining amazing image stabilization. You can shoot this camera handheld while zoomed in to 240mm, with the 2x teleconverter on, for a 480mm shot that is definitely usable. It doesn’t have XLR inputs, but you can always add a Juicedlink RM333 preamp for a super compact package. 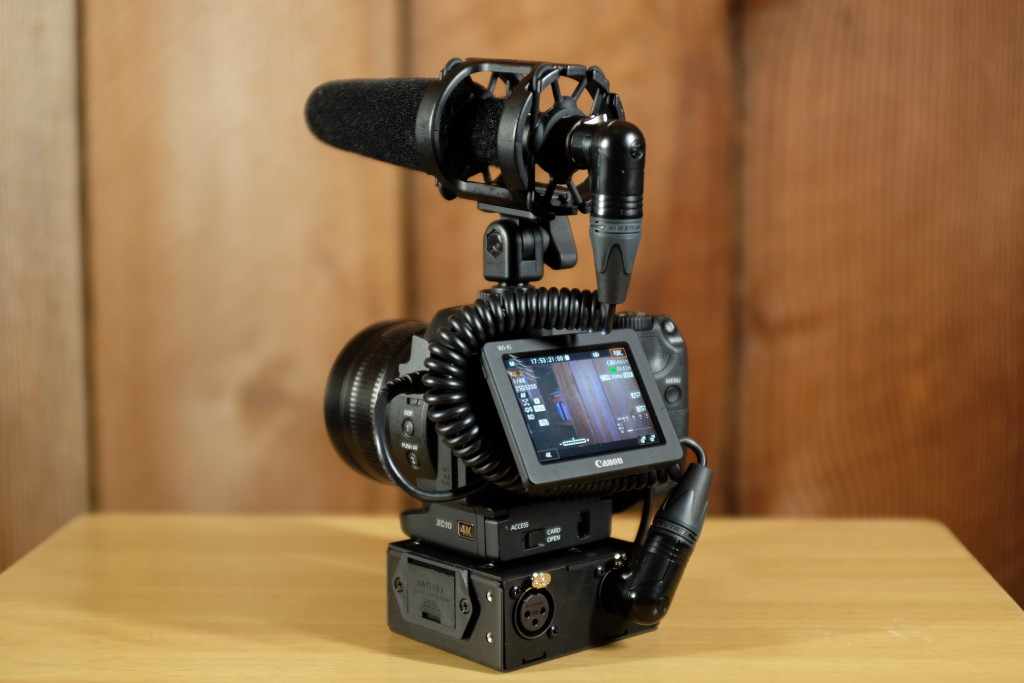 So in this tiny form factor, you have a camera that has the power and range of the C100 with two big lenses on it. That’s quite a difference in size, for much the same range. For shooters who value a compact camera above all other considerations, the Canon XC10 might be worth looking into. 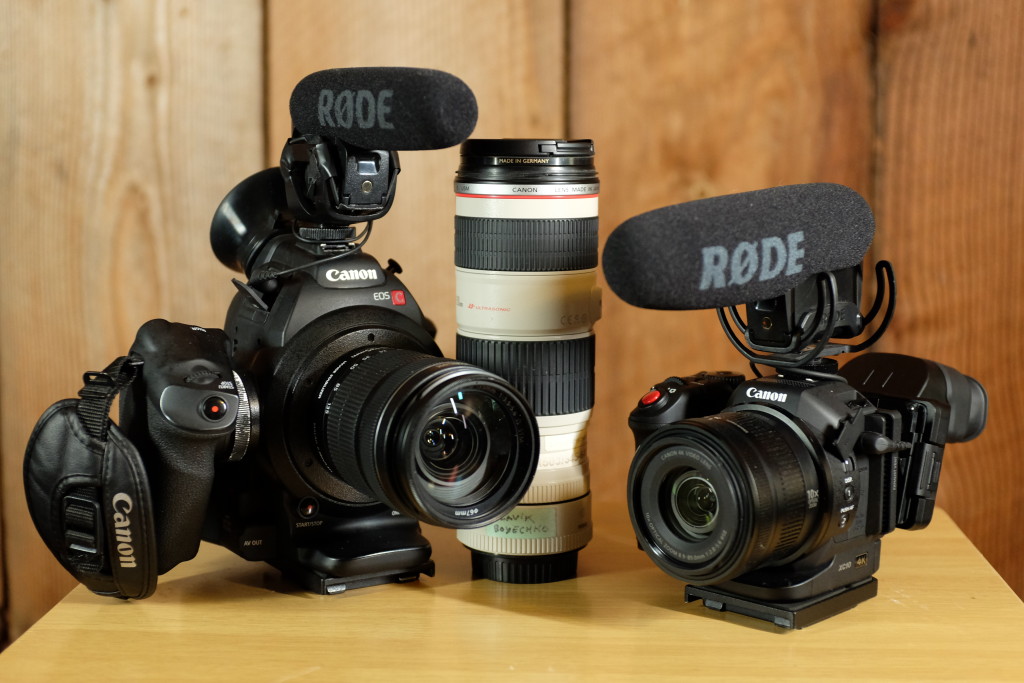 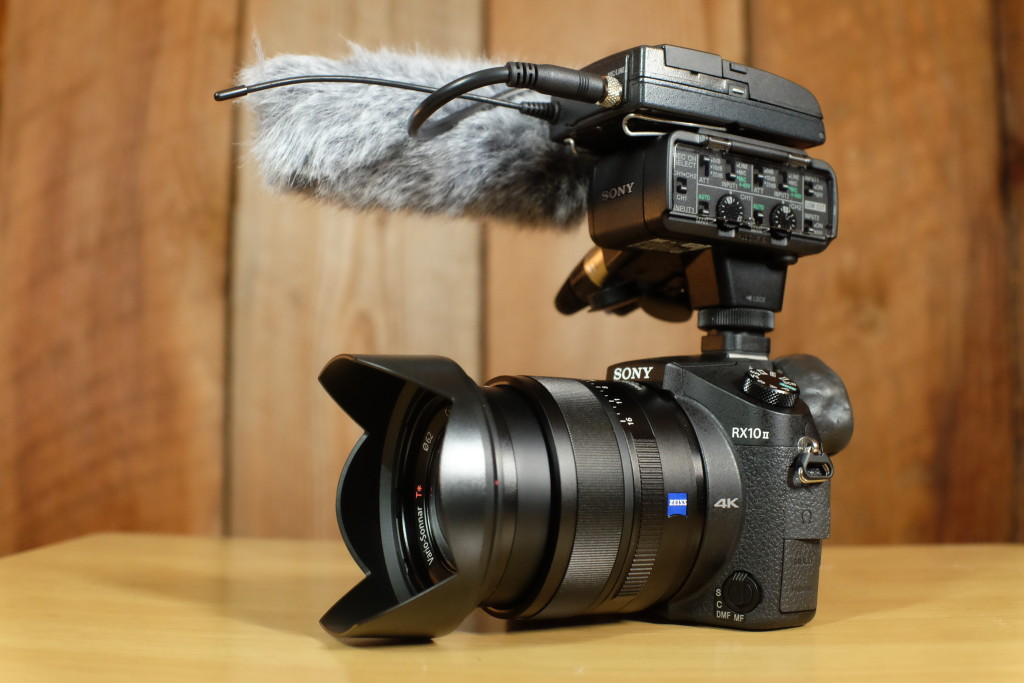 A cheaper alternative to the Canon XC10 is the Sony RX10 II, which can also shoot in 4k, also has a built in lens with a long range, but it beats the XC10 in that you can get an XLR adapter that gives you full audio control. The Sony XLR-K2M is also powered via the camera’s hot shoe, so you don’t need to worry about batteries. The above pic also shows a wireless lav receiver mounted to the top of the XLR adapter. 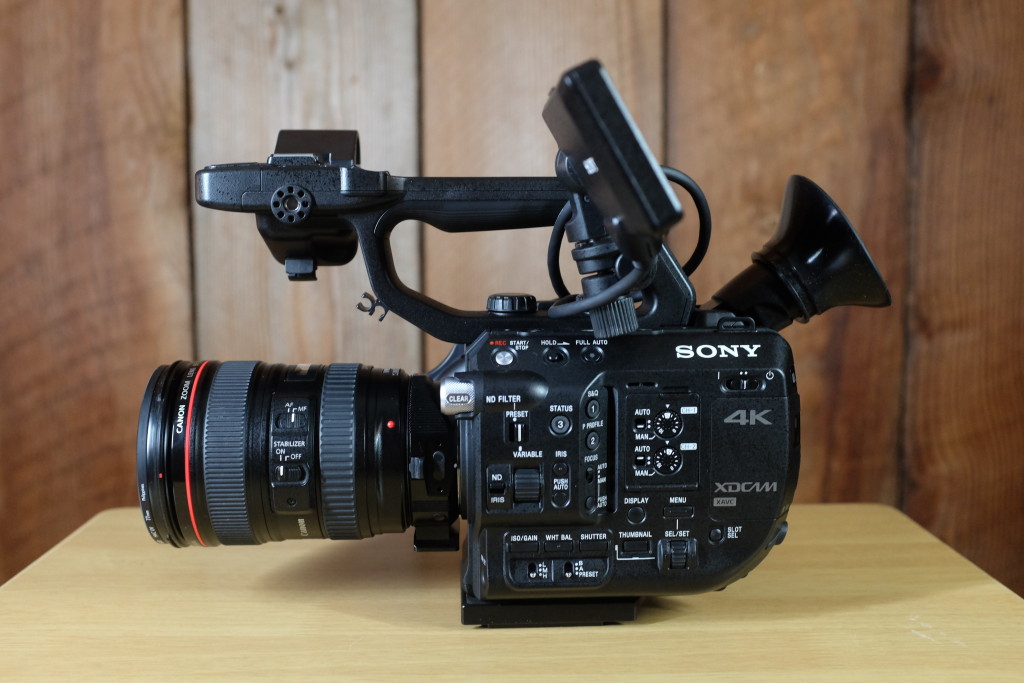 And finally, there’s Sony’s answer to the Canon C100, the Sony FS5. It can do everything the C100 can do but more (except autofocus reliably), and with the Metabones Speedbooster EF to E-mount, you can use your Canon lenses and gain a stop of light, and a slightly wider Field of View. There are lots the FS5 has going for it – I own one and have tested it with the above travel system, and the good news is it works just as well as the C100 does. Cheers to that!

Here’s the two cameras side by side. 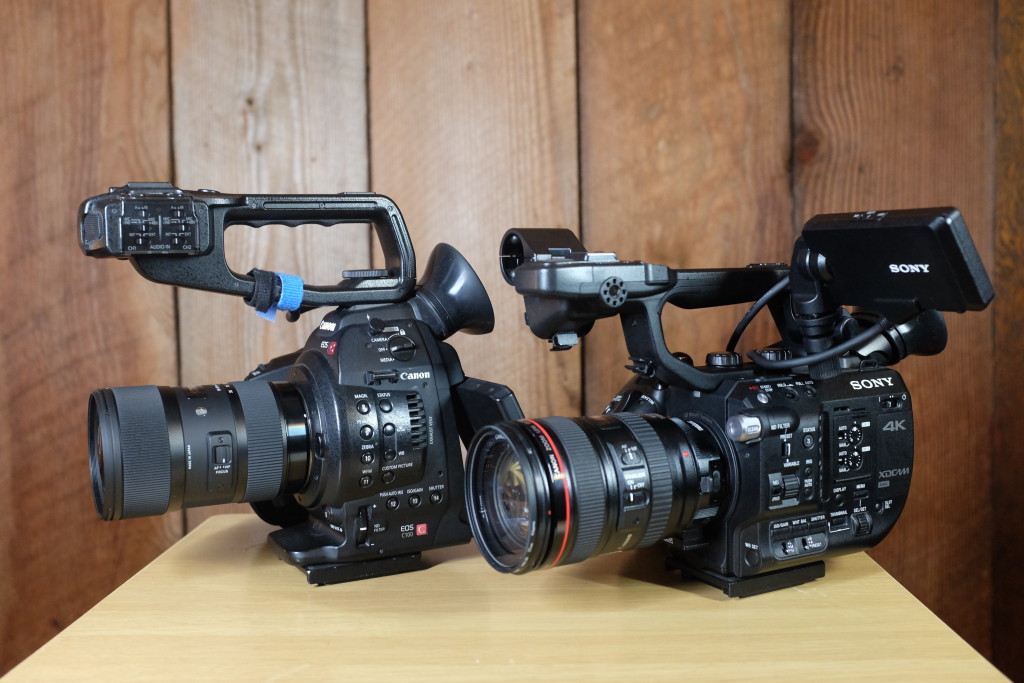 I hope this post helps you on your documentary filmmaking journey. Thanks and take care!