It’s been a month since my last post – sorry, but I swear it was for good reason. I’ve been busy putting together and testing possibly the greatest gift to documentary filmmakers everywhere … okay maybe that’s an overstatement, but at least to me, it’s a thrill. 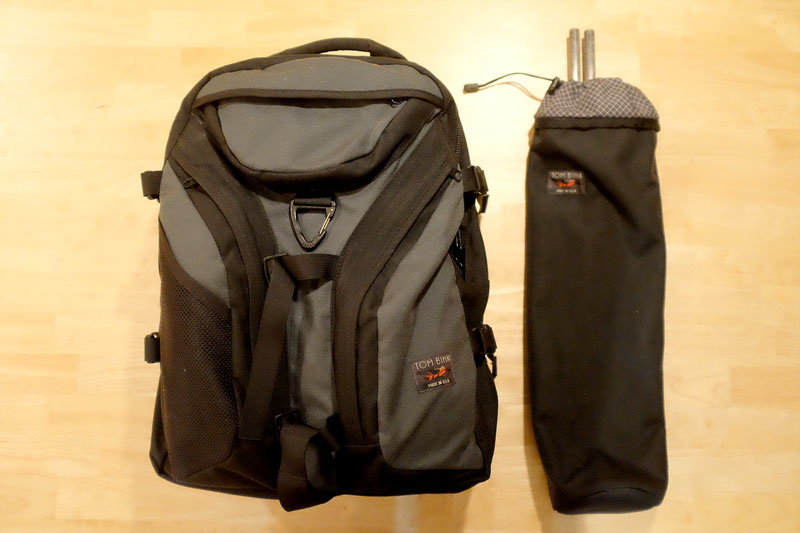 Over a year ago, One Square Mile filmmaker Carl Crum came up to Alaska to teach a week-long filmmaking class, and for a few days between the lectures, Carl, Travis, and I flew down to Ketchikan to shoot about 12 minidocs in 2 and a half days. It was crazy, but actually what scared me the most was all the gear. 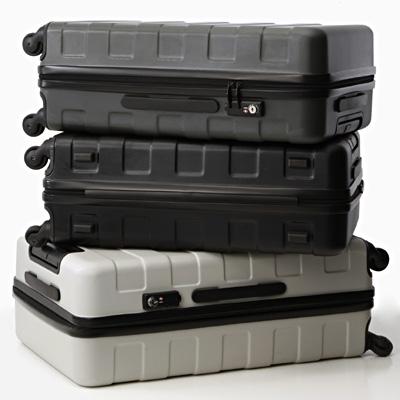 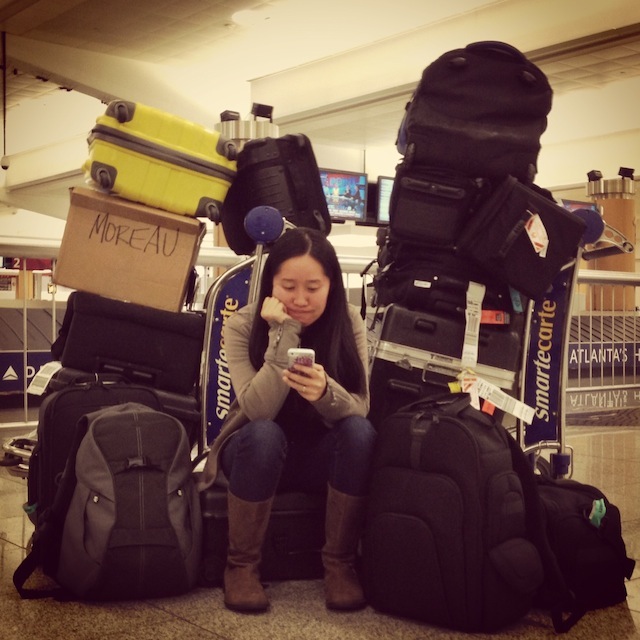 It was basically a lightweight one-man-band kit, but we had to check 3 big Pelican suitcases, each protecting Portabrace bags inside: one bag for lenses, one for lights, and one for Carl’s C300 and accessories, in addition to a heavy-duty tripod. Carl could manage all these bags himself, but I’m not a big guy, and I remember thinking, could I really travel with all this gear someday, on my own?

Since that trip, our Indie Alaska video team has been lucky in that we’ve always had more than one shooter come along on air travel, and for local videos we’ve always had a solid place to unload all our gear, and leave it all unattended in one place, to go to back and forth whenever we needed to swap gear.

But if we wanted to make a video that required a hike, ski-in, or constant movement between locations, we’d be in a tough spot. That worried me, and then what if I had to do something alone?

Well, this Thanksgiving I was supposed to fly down to LA to visit my mom, and I agreed to shoot a promotional video about her dental practice. And then for Christmas, I was to fly to both Portland to visit my family, while also stopping in Minneapolis to visit my wife’s family, where I was to shoot a documentary video for my brother-in-law about him and his fiancee – a couple’s love story that would be presented at their wedding later this year. These were trips that required us to carry other bags too, not just film gear. Total panic mode achieved. 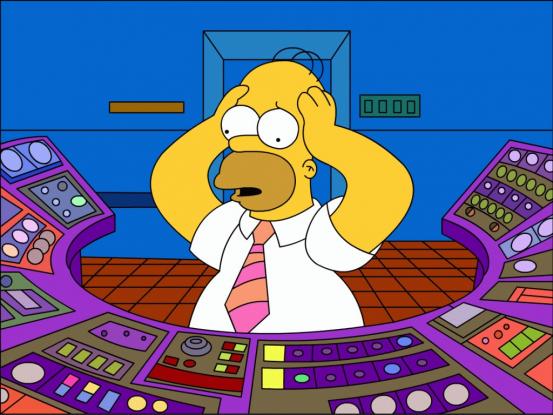 So, this is what prompted my sudden nosedive into building a single backpack kit, or whether it was possible at all. I own my own DSLR gear separate from our work gear, so that I can do family/friend videos without borrowing work stuff, but this last month I decided to up the ante and make this dream backpack filmmaking kit a reality (thank you, credit cards). Turns out, much of this stuff has only recently (in the last year) hit the stores, so I probably couldn’t do this earlier even if I wanted to. 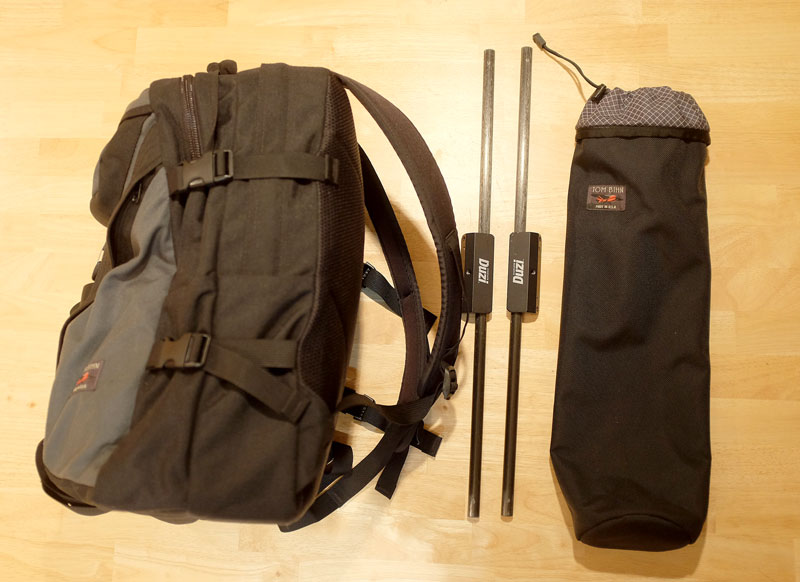 (Above) This is the setup that was my main carry-on. The Cinevate Duzi slider breaks down very easily, but the legs don’t fit into the bag (and I didn’t want to risk TSA questioning these “club-like objects”), so I put them in my main clothes bag (also a carry-on size).

I chose the Tom Bihn Brain Bag because I didn’t want to be limited by camera bags and their padded organization, and because Tom Bihn bags are friggin awesome, really durable, and have the most volume of space without the weight. I also wanted a simple backpack that wasn’t super intense like most large photography hiking bags. 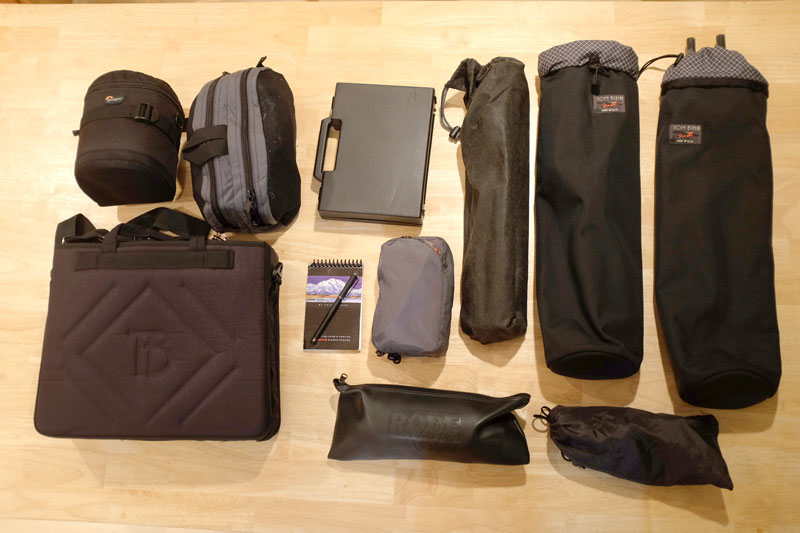 (Above) This is everything in the bag, all packed in manageable small cases, to make it easier to repack if I got inspected at the airport, and also so that if in the unlucky chance that I would have had to gate check this 35lb bag, I could be somewhat confident that the contents would be safely tossed around. 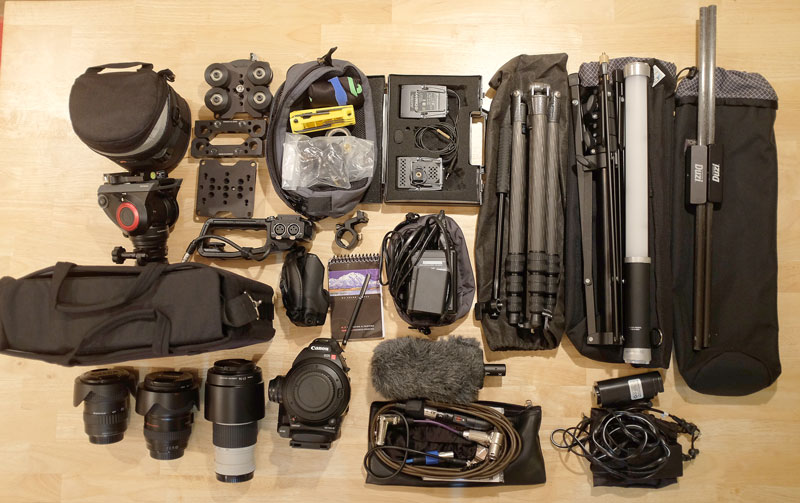 And everything unpacked. From top left, there’s the Manfrotto 500AH fluid head and Acratech leveling base (absolutely love this combo). The Tom Bihn Camera I-O insert below is basically made for the Brain Bag, and it holds my lenses (Tokina 11-16mm, Canon 24-105mm IS F/4, Canon 70-200mm IS F/4) and Canon C100 body. The Camera I-O has a strap on it, so for absolute run-and-gun I can just carry lenses and the camera with me, leaving the rest behind.

In the utility bag in the top middle are the Cinevate Duzi slider parts, some hex keys, AA batteries, the C100 handle and grip below, the shotgun microphone attachment (I remove this from the handle for travel, so it doesn’t break), the C100 charger and extra battery to the right, and a Sennheiser G3 lav kit above, with a Sennheiser MKE-2 lav mic. At the very bottom are the XLR cables and Audio-Technica AT875r shotgun with Rycote softie.

And to the right is the Gitzo 1542T tripod, a compact light stand, the Westcott Ice Light and battery/charger below, and the Duzi slider legs to the far right. 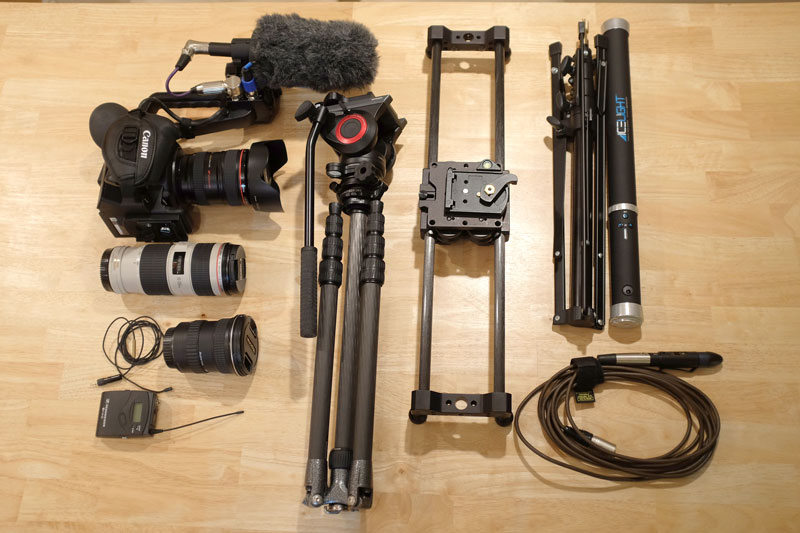 (Above) Here is everything without the bag and cases. Crazy how simple it is, right? Attached to the XLR cable is a Sennheiser MZA900P phantom power adapter. Basically I mic the subject at the beginning of the shoot, taking in wireless LAV audio in addition to Shotgun audio to the C100’s dual channels, and when it’s time to interview I swap out the G3 wireless transmitter on the subject to this adapter, so I can have wired audio without ever having to change out the LAV microphone on the subject. I can’t believe I’ve never heard about this before, it’s genius. 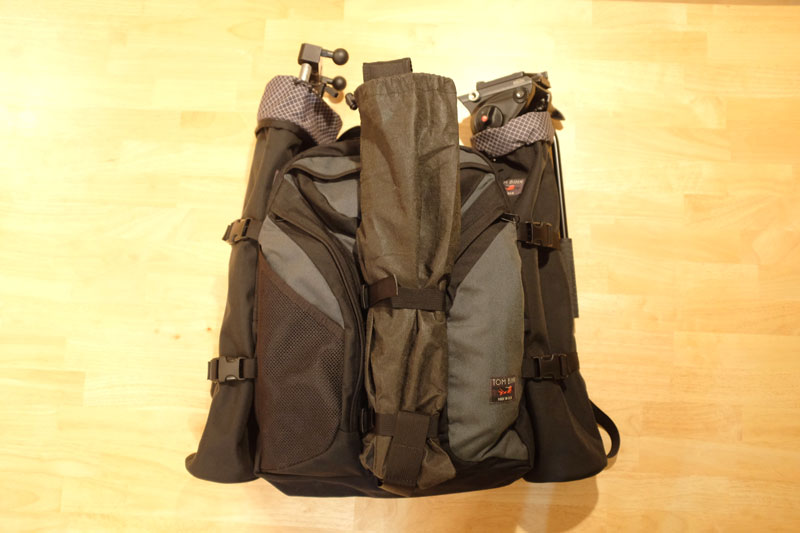 This is the packed kit ready for traveling on foot (or ski?), everything ready and unpacked inside and accessible for shooting. This is a different setup than the air travel setup, in that the tripod, slider, and light/stand are on the outside of the bag, using Tom Bihn Quivers attached to the sides. Have I mentioned how awesome Tom Bihn stuff is? 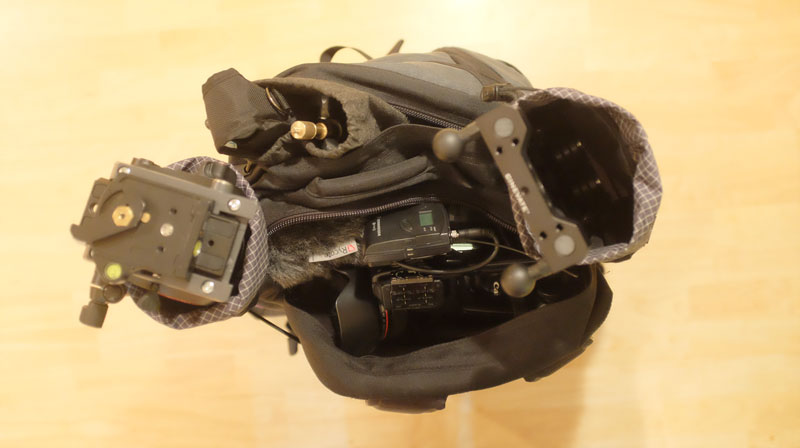 The issue with the C100 is it has a big, unwieldy shape with the handle and grip. The Tom Bihn Brain Bag is divided into a front and back area, and in this setup, the C100 sits above the lenses (in the I-O insert), but the only way to fit the C100 is to unscrew the handle and lay it over the camera. It only takes 5 seconds to screw back in, but it’s probably not good to continually take the handle on and off. A DSLR would fit a lot easier. 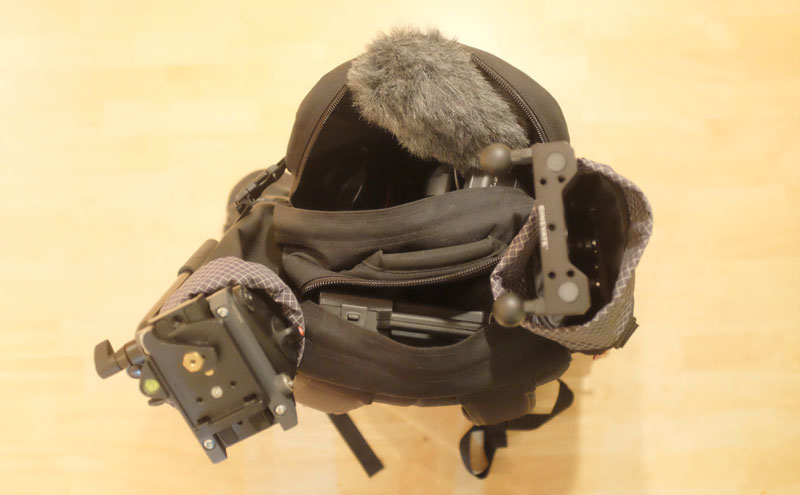 In this setup, I put some accessories and the G3/LAV kit above the IO insert, and the C100 fully rigged fits into the front area of the bag. It doesn’t go in like butter, but it fits. I think the G3/LAV case (a Sennheiser) is nice for protection, but the shape doesn’t squeeze in as well as a soft case would. 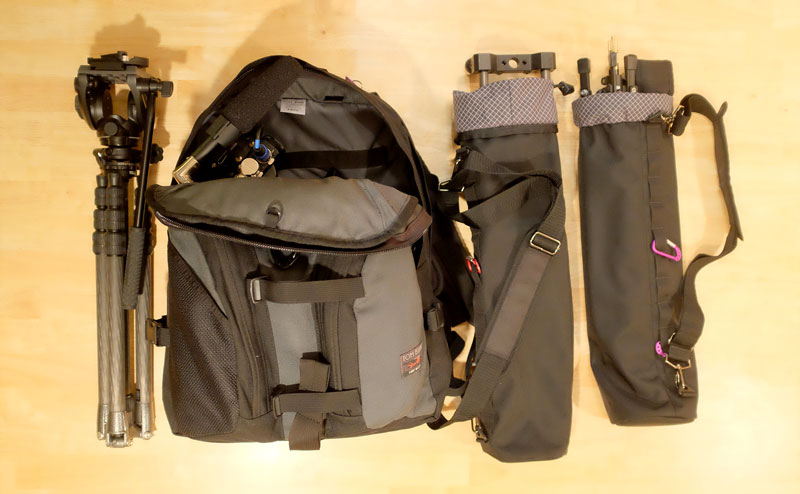 And finally, this is the setup I mostly use when I’m just running around town, not really needing to strap everything to my back. The slider and light/stand are in the Tom Bihn quivers with straps attached, the tripod is out, and there’s plenty of room in the bag for easy access to all the essentials.

I forgot to include headphones in these pics! I usually carry a pair of Sony MDR-7506 cans, as well as a pair of Klipsch S4 earbuds. I also usually bring a Canon 60D body for backup.

Is this kit everything you’d ever need for any shoot? Absolutely not. Even for run-and-gun Indie Alaska shoots I still use all our work DSLR gear, including a heavier tripod, longer slider, several LED 1×1 lights, and Portabrace bags that are more protective and not so snug.

But this kit has opened up so many options for the types of shoots I can do. The Gitzo carbon tripod, Duzi slider, and Ice Light on their own have made a huge difference. For example, I now shoot so much more on tripod and slider than ever before (instead of shoulder rig), which changes the production quality significantly. The Ice Light is simply amazing. And the C100 of course is incredible (and affordable thanks to a 0% interest 24 month lease).

And for once, I’m no longer panicking about traveling to make a solo video. Which probably means more videos for family and friends during holiday trips. Uh oh.