Recently I took some photos at the AYEA annual fundraiser, and I found myself shooting pictures a lot like I shoot video. I guess one of the byproducts of shooting video with fixed, prime lenses, is that I’ve learned some photo composition tips along the way.

It’s been especially helpful since I traded up my Canon t3i to a fixed-lens Fuji X100s camera. It has a wide 35-mm equivalent focal range, and there’s no zoom. A couple years ago this would have been a nightmare for me, but after shooting video on fixed lenses, I’ve learned some tricks.

Zoom with your feet, duh. But the more important lesson is, you have to get uncomfortably close to people! At first these people will look at you, they’ll try to pose, they’ll talk to you . . . sometimes for a few unbearable moments. But with documentary video, the less you interact with the subjects in front of the camera, the quicker they’ll ignore you. 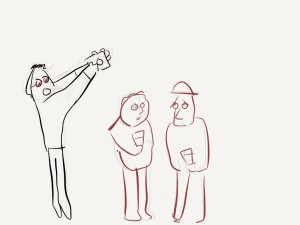 Reach the camera way high above the crowd, or way down below, and sometimes even at weird angles. Shooting high or low means sometimes you’re focusing the camera without being able to see what you’re framing, which means often an unusable picture, but sometimes it works out great.

A camera with an articulating LCD screen fixes that issue, but taking pictures with live view can be slow and/or awkward to focus. 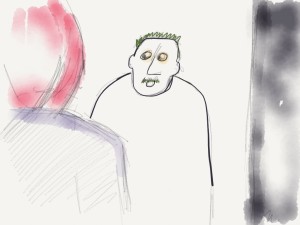 Most importantly, the one thing I’ve learned with fixed, wide-ish lenses is to put something blurry in the foreground, to create a composition that focuses on your subject.

So, the side of a wall, part of a chair, and often, a random person’s shoulder. That’s the benefit and curse of shooting with DSLRs – you can pinpoint your focus on someone in the frame, but keeping focus is an ongoing task.

I know I have big, long, heavy lenses that can make interesting photos very quickly and easily, but part of the fun of making videos and taking photos is learning how to compose good images, and shooting at a fixed focal length is really helpful at learning good composition.

Last year I made a video for AYEA’s fundraiser – and it was a lot easier to be “hidden” with a zoom lens. But, was it better?