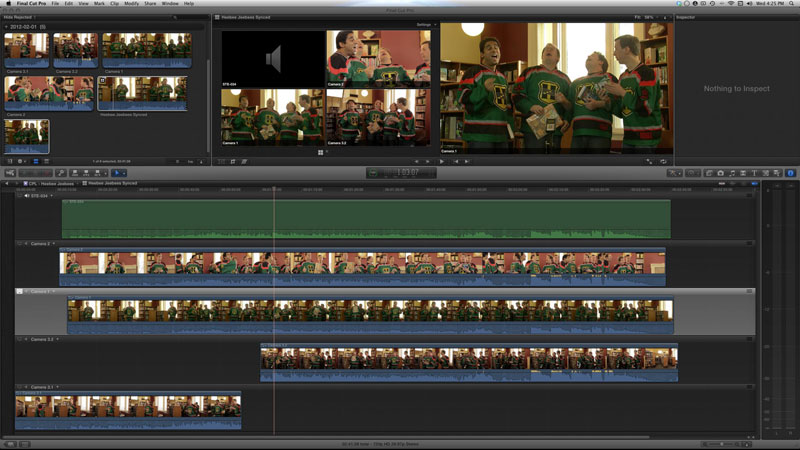 Wow, I had no idea that I have been living in a multicam cloud of joy with Final Cut Pro X. Apparently, people are amazed at what it can do (but haven’t tried it yet?). Here’s the link, and 20-minute video presentation inside: http://www.fcp.co/final-cut-pro/tutorials/1212-the-best-fcpx-multicam-demo-i-ve-ever-seen-ben-consoli-presents-at-the-the-boscpug 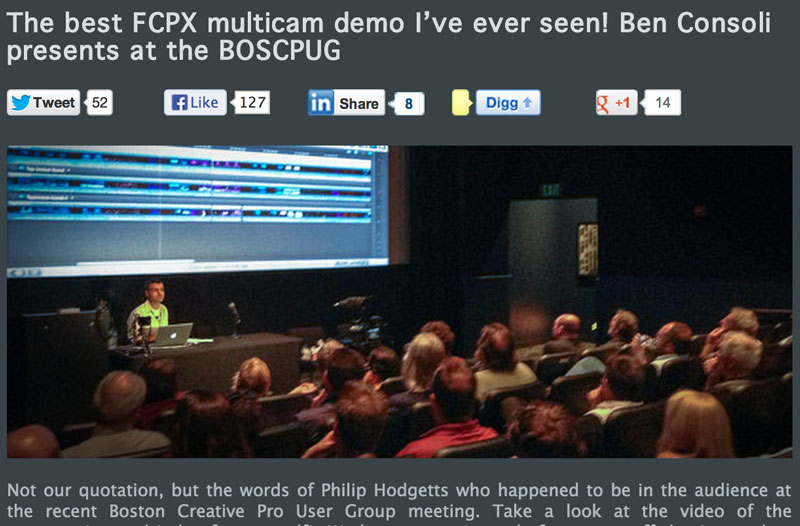 Before FCPX introduced multicam in 10.0.3 (I think), I would lay out 3 camera angles in the project timeline, and then go about cutting all the clips along the playhead, and then “hiding” (using “v” on the keyboard) the angles I didn’t want visible. It was painstaking. Audio was crazy. And when clips lost their sync, I would lose my shit.

Now, we shoot at least 3 cameras for every interview, pledge pitch for TV, single-person pitch for any kind of promo, live event, music, you name it. Then we throw all the dozens of clips into Pluraleyes, it creates a multicam file in a few minutes, and bam! the editing begins. Like Ben Consoli says in the video, it’s actually pretty sweet. I could have an entire year of blog posts about the various parts of FCPX multicam . . . is this what you want? 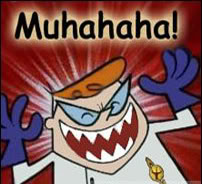 Anyway there’s something that’s been bugging me, that I just recently learned how to fix. I love to use my keyboard to select the angle while editing in multicam, so pressing 1, 2, 3 etc. But often I have to choose whether to select both video+audio cutting, video-only cutting, or audio-only cutting.

I wished there was a keyboard shortcut to change to video-only, audio-only, or both video+audio cutting, but when I went in to create custom keyboard commands (Final Cut Pro -> Commands -> Customize), I couldn’t find it. Maybe I was missing something, but when I emailed Apple about it, they told me to just go in and search “multicam” and voila, these commands were already set to shortcuts!

But the default shortcuts aren’t great, in my opinion. Option-Shift-3? No thanks. So, here’s a screenshot of me changing these to Command-1 (audio+video cutting), Command-2 (video-only), and Command-3 (audio-only). It asks if you want to replace the former commands, which is to select the event, player, or project, and yeah, I don’t really need those keyboard shortcuts. 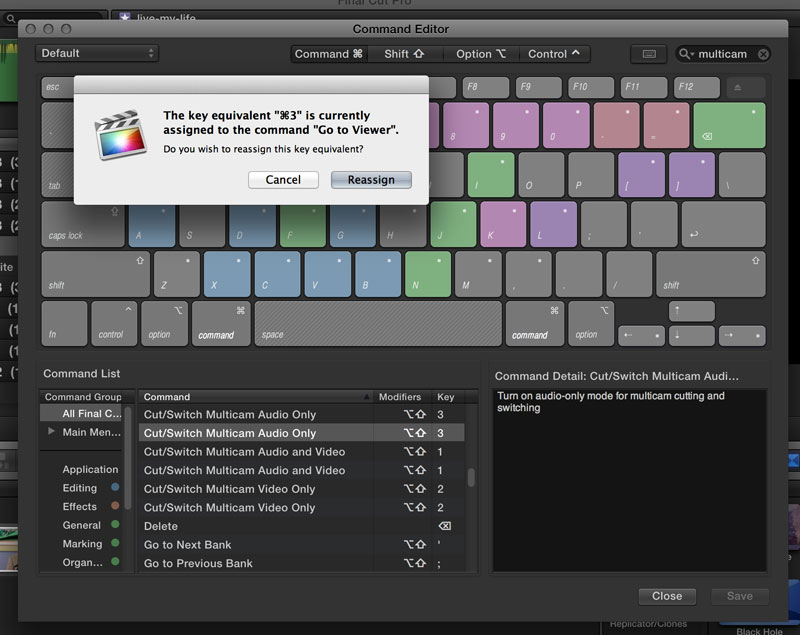 So there you have it! Now you can edit multicam quickly with your keyboard shortcuts, and the standard j-k-l to go forward and backwards.