Since I’ve just started tweeting this blog (@akvideoshooter) I figured I’d also go back to the older Indie Alaska videos for some behind the scenes.

So let’s go back to the very first one! 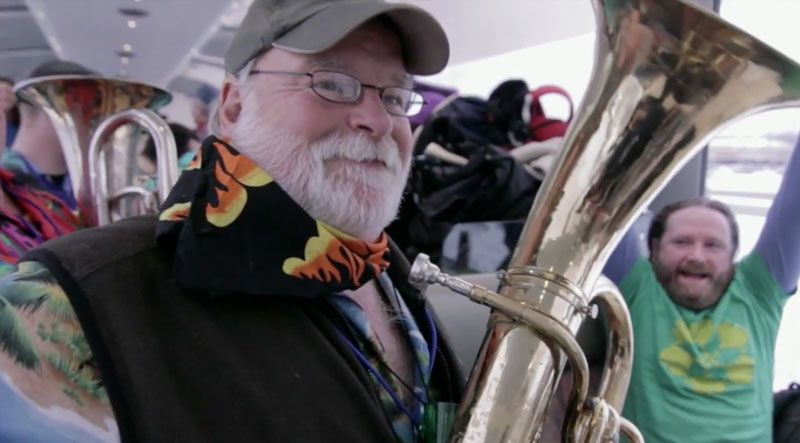 The Ski Train is an institution in Southcentral Alaska. Early in the morning hundreds of cross-country skiers board a train in Anchorage, and hours later arrive in a pristine area full of untouched snow, and then party to polka on the way back home.

At least that’s what I heard. Truth is, neither Travis nor I had ever been on the Ski Train before we scheduled the shoot. I always thought it was for serious skiers. 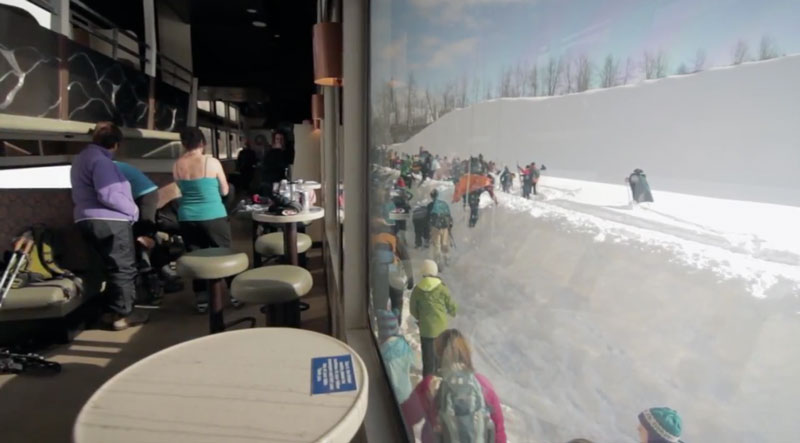 So we didn’t quite know what the story was going to be. This was, after all, our first attempt at an Indie Alaska. All I knew was, polka band, and serious skiers.

When we arrived at 6:30am at the train station, we were immediately offered shots of Jaegermeister. What? These skiers weren’t that serious after all. 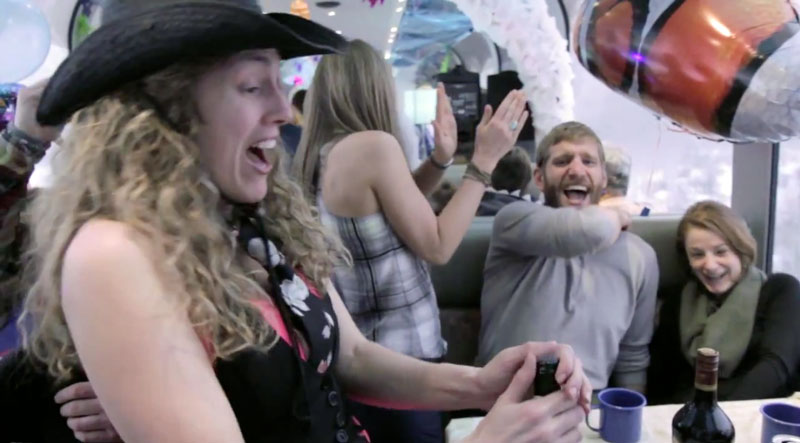 Okay so fast forward to the shooting. Some challenges were tight spaces, rocking train, and still no idea what the story would be. We needed interviews, but everyone on the train was partying, and later they would be skiing, before partying again. 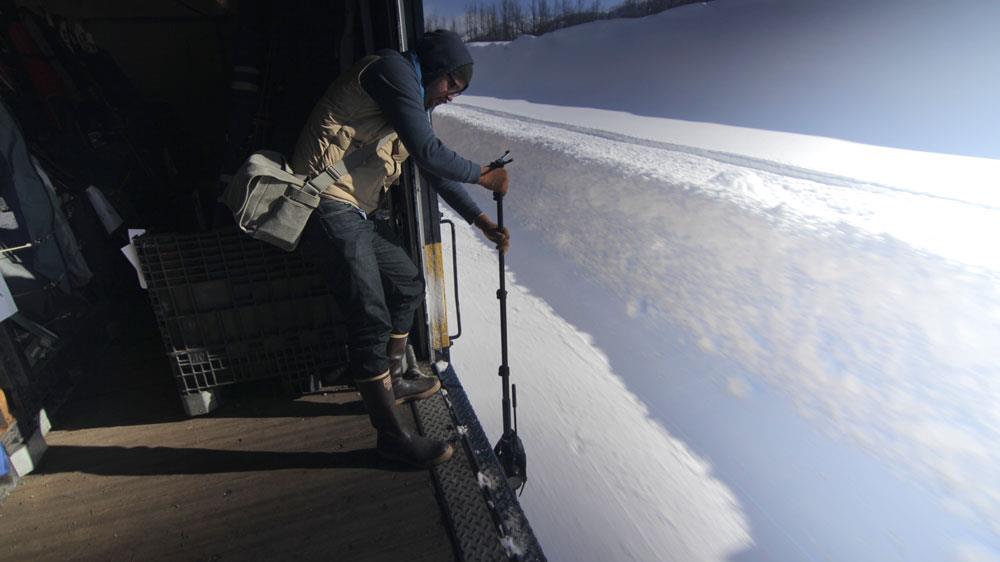 When we arrived in Curry, we had already filmed a few hours of footage, mostly of the polka band performing a few songs in each car. And when all the skiers had disappeared into the hills, the polka band stayed behind for beers and cigars. Here was our story.

Thank goodness, because although Travis and I brought some waxless skis, we weren’t sure about lugging all our gear to a remote hill to chase down interviews. And also if you’re not back in time, the Ski Train leaves without you (they leave an overnight survival bag with blankets and food, and maybe Jaegermeister). 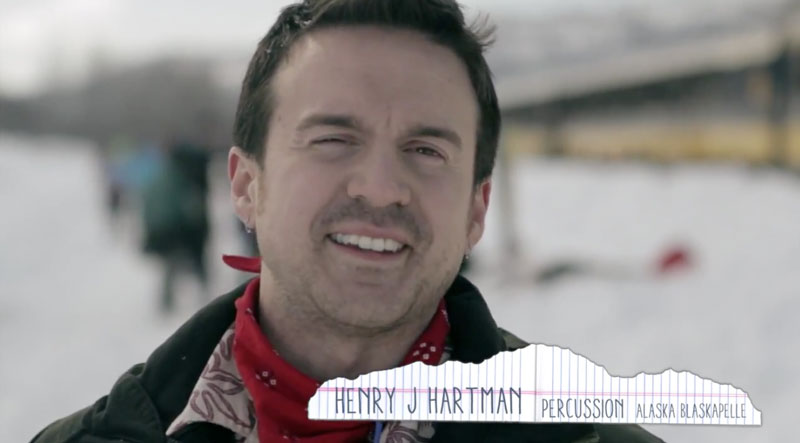 Shooting interviews for 3 hours in deep snow…let’s just say once your feet start freezing, they only get colder. Plus, the train was supposed to leave and come back, but ended up staying, making consistant loud engine noises throughout the interviews, as trains end up doing. Plus there were airplaines above, and snowmachines buzzing around. But that kind of “it’s far from ideal but let’s shoot anyway” spirit has prevailed through all of the Indie Alaska videos since.

So outside, we probably looked funny with our LED light on skinny legs, with an umbrella diffuser, camera bags sinking into the snow, shivering. But we had written our questions down in advance, and having those questions when you can’t really think…that was a lifesaver. “How do you think outsiders perceive Alaska?” 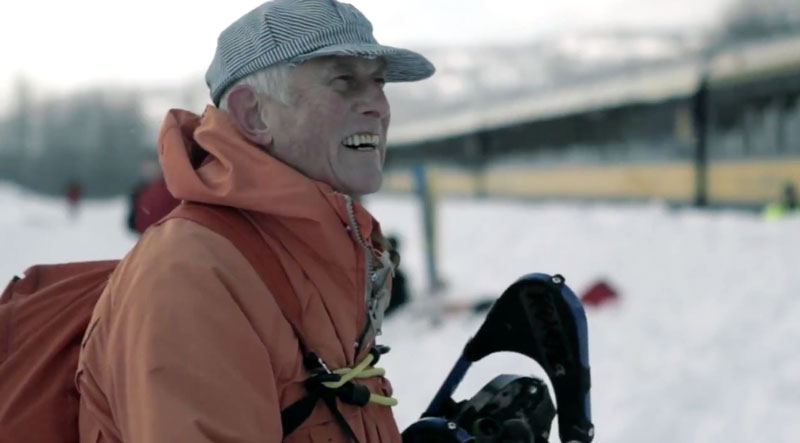 From the beginning, the Indie Alaska series was out to portray real Alaska, and the everyday people who are kind of amazing up here. That’s the opposite of what most of the world thinks about Alaska, thanks to the dozens of reality TV shows about hardcore backcountry dudes.

And this difference was made obvious during the very first Indie Alaska shoot. While we were shooting the hundreds of cheerful passengers and independent spirts among the band members, a couple cameramen from a reality TV show were also on the train. They were looking for drama, however. So, the minute a kid was approached by the train security for some minor infraction, these cameramen jumped. And that’s what the story everyone in the Lower 48 will see. 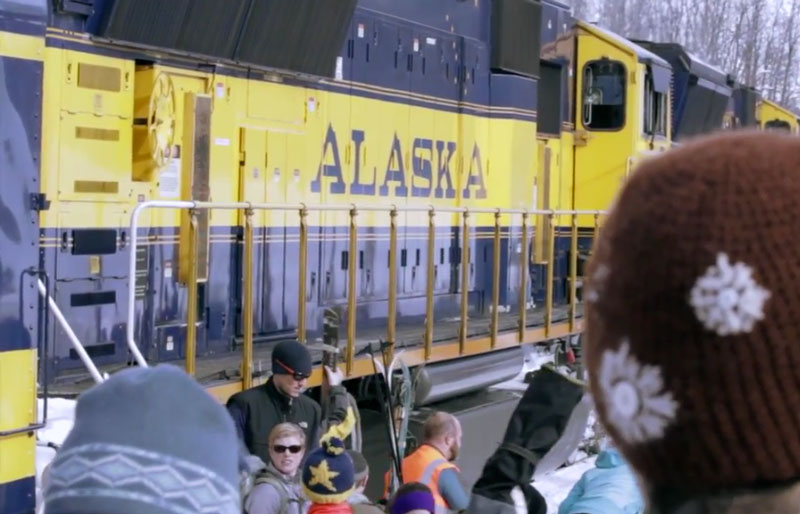